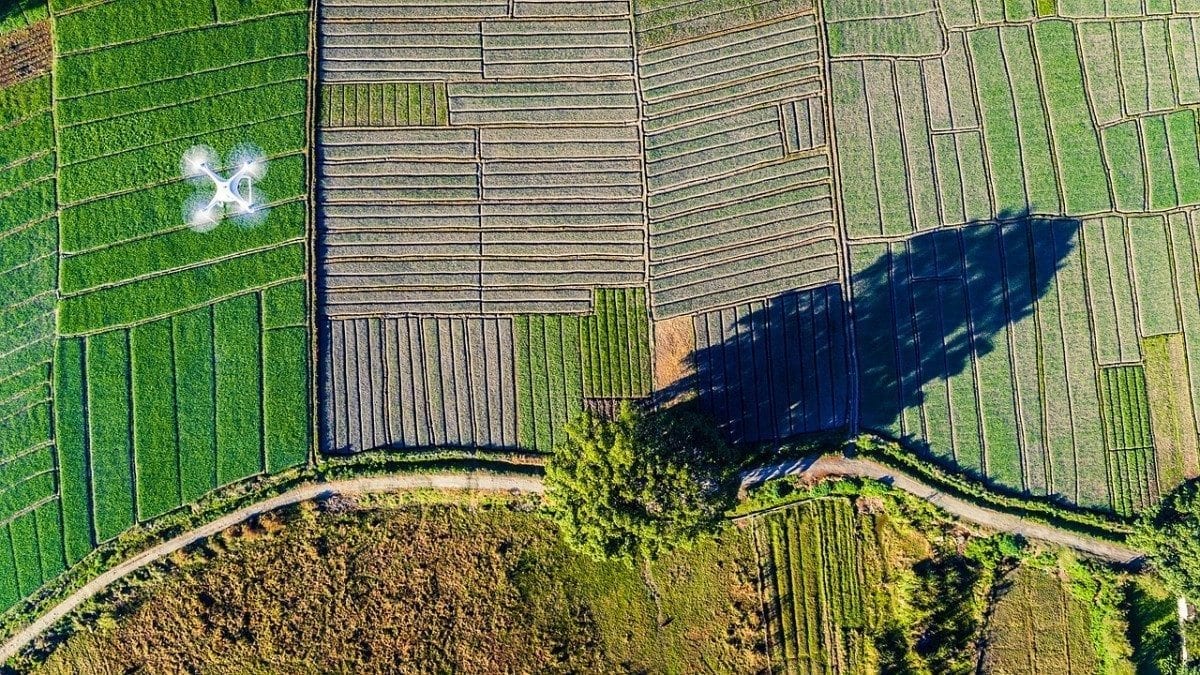 5G networks will provide farmers and the agricultural industry at large with the infrastructure to leverage advanced Smart Farming IoT technologies for tracking, monitoring, automating and analyzing their agricultural and industrial operations.

Today, there are an estimated 6.4 billion devices connected to the internet, however, according to Gartner, by the year 2020, there will be 20.8 billion internet connected devices. It is also estimated that, in the same year, 12,000,000,000,000 GB of data will be transferred between connected devices. In order to improve upon previous iterations such as 4G LTE, fifth generation (5G) wireless connection developers will need to bring into play various emerging technologies such as multiple input, multiple output (MIMO). MIMO is a wireless connection technology that uses multiple transmitters and receivers at the source and endpoint to allow more data to be sent and received simultaneously and could help carry the burden of a continued increase in the numbers of connected devices.

One of the more startling statistics about our ever increasing population comes from the UN Food and Agriculture Organization which states that, in order to feed our growing numbers, farmers across the globe will have to grow 70% more food in 2050 than they did in 2006. At first, this may sound like a nearly impossible task given the ever-changing nature of our environment. Climate change, soil degradation and water shortages are all hurdles that continue to increase in size over the years. However, our desire to continue to create and improve technologies that assist us in our struggles has driven the evolution of technological feats such as Industrial IoT and its agriculture applications we refer to as “Smart Farming IoT”.

What is Smart Farming IoT?

Smart farming is the term used to describe the adoption of modern information and communications technologies in order to enhance, monitor, automate or improve agricultural operations and processes. Sensors collect information such as soil moisture, fertilization, weather and transmit that through a gateway over cellular wireless network to a central hub providing farmers real time access to information and analysis on their land, crop, livestock, logistics and machinery. This enables the smart farm to improve its operational performance by analyzing the data collected and acting upon it in ways that increase productivity or streamline operations.

Today, countless farms around the world are beginning to implement IoT-enabled technologies and seeing the benefits. From helping with the irrigation of blueberries in Chile, to the helping to fight crop diseases in India, the sheer number of potential applications of IoT technologies in agriculture almost appears limitless. There are, however, a few hurdles still left in the way before globalized adoption becomes a reality. Cost is at the forefront of every farmer’s mind and, given the poor state of the industry in some of the world’s less affluent nations, it could take a while before the newer technologies become affordable for them. There is another side to this coin as well though, as increased innovation and production of these technologies means that even premium equipment will soon be supplanted by superior models, thus reducing the price of older equipment that would still bring many benefits to currently offline farms.

So what are these technologies and how can they help? Given the huge variety in niche equipment needed to successfully run a modern-day farm, it will come as no surprise that the IoT technology available to the agricultural industry today is just as varied and also has the benefit of being able to be made bespoke to a specific requirement. This provides the much needed precision farming equipment needs in order to optimize and streamline traditional agricultural operations while also being able to feedback information on equipment use and performance, maintenance and repair data and environmental conditions. This enables farmers who adopt these technologies to further increase their productivity and the speed at which they are able to operate. In order to understand the benefits to Smart Farming IoT technology can bring, let’s look at where they could be applied and how they could help improve farming and agriculture.

Water Management: Irrigation systems are one of the most common features of any farm or agricultural site. In order to optimize irrigation systems, farmers could access data collected from remote sensors and use it to analyze where their water resources should be directed, in what kind of volume and for how long, and all from their connected laptop, tablet or smartphone.

Fertigation: Fertigation is defined as the injection of fertilizers, soil amendments and other products typically needed by farmers into soil. With an IoT-enabled fertigation solution, farmers could remotely control how many fertilizers are injected and within what volumes. It would also enable them to monitor fertilizer concentrations and other environmental conditions, such as ph, in the soil using remote sensors and adjust to the required levels if necessary.

Livestock safety and maturity monitoring: Anyone who’s ever worked on a livestock farm will tell you that, sometimes, animals tend to wander off. With IoT-enabled sensors producing real-time livestock data such as GPS positioning, farmers will be able to keep track of even the most determined-to-travel animals. There are even systems being developed that provide real-time biomedical data on livestock such as body temperature, pulse and even tissue resistivity.

Crop Communication: As the world becomes ever hungrier, farms will need to be able to keep up with global crop requirements. In order to do so, Smart Farming IoT solutions can be deployed to enhance production, minimize waste and costs and improve resource consumption. The ability to monitor the condition of the soil in which your latest crop is planted via your smartphone or tablet is something most farmers would jump upon if given the chance.

Drilling, Seeding and Spraying: Driverless vehicles have a major application in Smart Farming IoT once that market matures. Remote controlled autonomous tractors built to do functions such as drilling, seeding and spraying are already being deployed in pilot projects and have shown incredible results.

Aerial Crop Monitoring:Monitoring a vast field to expose issues related to soil variation, fungus and irrigation is quite challenging and costly to achieve in a timely fashion. But thanks to cheap drones, equipped with MEMS sensors, inexpensive but powerful processors, GPS and radio technologies, now farm monitoring is not only affordable but way more precise. Now farmers can use time series animations to keep an eye on development of their crop and soil variation issues leading to more efficient crop management

As we’ve seen, there are various ways in which Internet of Things applications can enhance farming and agriculture. Many of these systems are also multi-functional and can provide solutions to more than one agricultural aggravation. Let’s now take a look at some real-life case studies where the adoption of Smart Farming IoT technology by farmers in different areas of the world has had significant and quantifiable results.

Blueberry Irrigation in Chile: With fruit being one of Chile’s largest exports, farmers in country need to be able to produce large amounts in order to satisfy demand. According to researchers at Chile’s UCSC University, the implementation of remote sensors around farming areas has reduced the volume of water used by 70%. The placement of sensors in the soil allowed farmers and researchers to monitor the conditions of the soil as well as the plant’s requirements. In doing so, farmers were able to optimize their irrigation process in order to use less water while increasing plant yields due to optimized conditions.

Fighting Disease in India: Crop diseases are one of many hurdles farmers and those working in agriculture have to continually deal with. One way in which farmers in the Indian State of Punjab are fighting these diseases is through the data collected by IoT-enabled remote sensors. By monitoring conditions such as humidity, rainfall and temperature levels, farmers are able to better determine their crops susceptibility to disease and act accordingly. With India’s population now surpassing a whopping 1.2 billion people, the ability of farmers across the country to grow crops with a reduced risk of failure due to disease is essential. Smart Farming IoT solutions promise to provide greater food-security and optimized yield for this largely agrarian economy.

Pest Control in Slovenia: Another battle farmers are constantly fighting is that with pests. Greenflies and fruit flies are among those targeted by farmers in order to protect their crops. In Slovenia, several fruit growers have begun to use data and automation to fight back against these pests. By using the data collected from remote sensors and other equipment, growers can begin to understand their fruit or crop’s growing habits better which can then help manage pests more effectively. Using similar methods, data from such sensors has also been used to automate and enhance the efficacy of spraying pesticides which can also save time, money and resources.

So, we’ve now seen how the adoption of Internet of Things applications and equipment in the agricultural industry is making a real difference, not only by speeding things up or automating them, but by also providing the data that enables those working in farming and agriculture to visualize their performance and actively take steps to improve their operations and end product. However, don’t go thinking that the integration of IoT applications in agriculture don’t come with challenges of their own. In order to best realize the potential for these applications, farmers and those working agriculture will need to encourage new practices and procedures in order to secure and maintain these network systems.

With the Internet of Things looking set to revolutionize not just farming and agriculture but many global industries, more and more businesses and organizations are looking to build stable foundations for this new, evermore interconnected world. This means that, when upgrading or replacing older, traditional systems, owners or managers in potential smart farms will most likely be looking for open platforms that allow for integration with certain aspects of existing systems (video surveillance, for example) as well as proving smooth upgrade paths for future technologies so as to reduce the financial burden of keeping your systems and security up to date. The benefits of open systems are currently doing the rounds among users of IoT applications and it may not be too long until we see significant steps toward them taken.

As with any internet-based technology, Smart Farming IoT applications and technologies are vulnerable to cyber threats from hostile attackers and stringent risk analyses will be required in order to understand where vulnerabilities may be and how best to address them. There are various kinds of Industrial IoT security hardwareand software solutions available to meet specific or more general security needs and performing risk assessments will enable users to build a bigger security picture and understand their requirements. With the use of remote, wireless technology, hackers and those looking to do a damage are able to hack into the network using less secure operational technology to steal data and even take control of autonomous machinery or equipment which can be damaged and cause substantial financial and operational issues.

While past experience can never prove the future, it can be estimated by observing trends and industry requirements. The future of agriculture is now looking to be increasingly dominated by Smart Farming IoT technologies and network systems that provides farmers with visibility and analytics on their land, crop and machinery like never before. The sheer amount of data that these applications can unlock and give farmers access to is unbelievable and, by the year 2025, it is estimated that there will be roughly one million data points generated per day from an average smart farm. This new insight into how farm processes can be optimized and automated by machines will no doubt lead to further innovations in agricultural technology. Of that, we can be fairly certain.